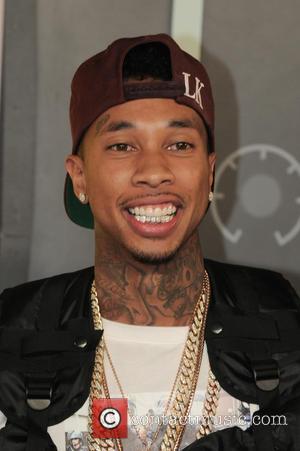 The pair is said to have started dating last year (14), following Tyga's split from his baby's mother, Blac Chyna, but they have continued to play coy over the status of their relationship, despite frequently being photographed together.

Now it appears the couple is finally ready to go public with its love affair after locking lips in the promo for Tyga's new song, Stimulated - an innuendo-filled track which appears to detail the 25 year old's controversial romance with Jenner, who turned 18 in early August (15).

In the video, released on Sunday (30Aug15), Jenner is featured meeting her boyfriend at a mansion, where she greets him with a kiss on the balcony as they cuddle up and laugh in the sunlight.

The tune recently hit headlines for its suggestive lyrics, in which Tyga seemingly raps about sex with the teenager.

"They say she young, I should've waited/She a big girl, dog, when she stimulated".

The stars further showed off their love by making their red carpet debut together at the MTV Video Music Awards in Los Angeles on Sunday (30Aug15).