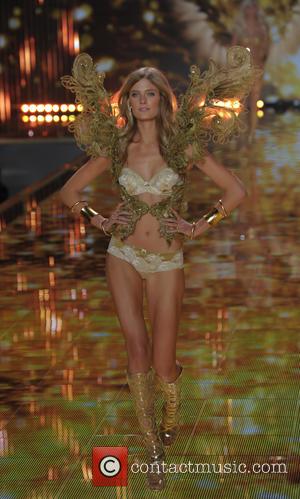 Victoria's Secret beauty Doutzen Kroes is stepping down from her post as one of the lingerie brand's top models days after it was announced Karlie Kloss had quit to focus on her college studies.

The Dutch model has been a veteran "angel" for the company for the past seven years, but Kroes secretly cut her ties from Victoria's Secret in December (14), and the company's president confirmed the news on Tuesday (24Feb15).

In a response to fans questioning Kroes' relationship with the brand, Vs president and chief marketing officer Ed Razek took to Instagram.com to address the reports, writing, "After I posted the news about Karlie Kloss leaving Vs I got a number of texts asking me why I hadn't said anything about Doutzen leaving at the end of last year. Fair question.

"The simple answer is I should have. Doutzen had a lucrative opportunity in Europe and it would have conflicted with her Vs obligations. So, at her agencies (sic) request, we released her from (her) contract. There was no conflict. No animosity. None of the nonsense I've read on Instagram.

"She had a great business opportunity, and I wanted to be fair to someone I adore and respect. That’s all. I honestly believe Doutzen is one of the most stunningly beautiful people in the world. And I always will. I have told her that many times. Now you know."

Kroes, 30, welcomed her second child, daughter Myllena Mae, with husband Sunnery James last July (14). She is also mum to son Phyllon Joy, who was born in 2011.