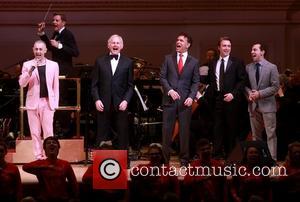 Speaking to author and journalist Abigail Pogrebin as part of the What Everybody's Talking About series, he says, "We play music, we dance, we sing; it's not too crazy. On Wednesday, the matinee days I made soup in a crockpot in my dressing room. I'm obsessed with slow cookers because you can leave it all day long. My intern would chop up all the ingredients. I was too busy so I would direct the soup! I'm vegan so I would do a really good vegan chili or stovies, which is a hearty Scottish potato heavy dish and lots of different soups like coconut creamy mushroom; all kinds that I just make them up from my head.

"And Campari America has all these different brands, like Skyy Vodka, and bizarrely I got this sponsorship deal with them and they supplied all the booze for an entire year for our dressing room! I just have cases and cases of it. It made a great thing for the whole company (of the show) and guests would come and then towards the end it became known as this thing and everyone was trying to get in!