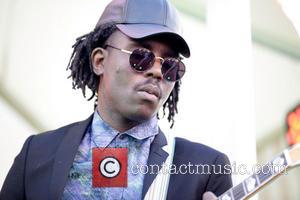 An online fundraising campaign to help musician Blood Orange recover following a fire at his New York apartment has raised more than $17,000 (£11,333) in less than 24 hours.

The British star, real name Devonte 'Dev' Hynes, took to Twitter.com on Tuesday (17Dec13) to reveal he had lost everything in a blaze at his home, including music he was working on, sentimental items and his puppy.

Robin Urbani, the mother of Hynes' girlfriend Samantha, subsequently created a page on fundraising website GoFundMe.com asking fans to make donations to help the musician get back on his feet.

The initial goal of $5,000 (£3,333) was reached within two hours and the total raised is now more than triple the original target, thanks to celebrity support from the likes of British singer Lily Allen and Tv presenter Alexa Chung.

Urbani took to the fundraising website to thank donors, writing, "I am overwhelmed by all the love and support being offered to both Dev and Samantha!... Thank you so much everyone!! I hope more people will continue to share this and make even small donations.. as I am sure the goal I set is only a small fraction of the value of everything that has been lost."