Who, Me? Brandi Glanville Denies Cheating On Eddie Cibrian 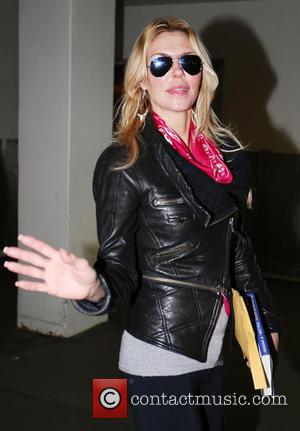 Brandi Glanville has vehemently denied a report that she cheated on ex-husband Eddie Cibrian before his affair with country singer and actress Leann Rimes. US Weekly magazine quotes several sources as saying Glanville, 40, cheated on the 39-year-old actor several times during their eight-year marriage. "Brandi loves to play the victim, but she doesn't tell the whole story," the magazine said, quoting one source.

Brandi- one of the stars of Real Housewives of Beverly Hills and author of the new book Drinking & Tweeting - took to Twitter on Tuesday (February 5, 2013) to deny the report. "Apparently I cheated on eddie a few times with some Hot guys! Wow! Grasping at straws 4 yrs later a week before book is out #WISHIHAD watev," she wrote. She also took aim at one source who claimed she had sex with another man shortly after giving birth to her second son. "I had the baby blues after Jake was born I wasn't even hav n sex with EC let alone anyone else," she said, adding, "Such BS but I kind of want to buy the mag now."

In one of the biggest celebrity stories of that year, Rimes, 30, had a very public affair with Cibrian while he was married to Glanville. Both divorced their then-spouses and married each other. Glanville and Rimes have been involved in a spiky Twitter spat for over a year.