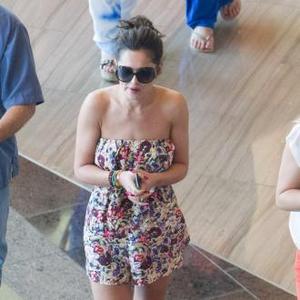 The singer is apparently in her first real relationship since splitting from ex-husband Ashley Cole.

A told The Sun newspaper: ''It's early days but they are an item.''

They met when Tre appeared alongside Cheryl as she performed her single 'Promise This' on 2010's 'x factor' live finals.

Cheryl met up with him again when she celebrated her 29th birthday in Las Vegas, Nevada last month -- and the pair have been inseparable ever since.

A source said: ''It's going well. They really like each other.''

Cheryl has had a string of secret dates with Tre and has apparently been out with him twice this week alone.

On Monday they enjoyed a double date with Girls Aloud bandmate Kimberley Walsh and her boyfriend Justin Scott at Nobu restaurant in West London.

Then on Tuesday she put on a black mini-skirt and vest top for another meal with him at Roka restaurant in central London.

A fellow diner there said: ''They are clearly very close. Several times Cheryl leaned in to him and touched his knee as he spoke. There is certainly a Spark between them.''

The former 'X Factor' judge has never admitted seeing anyone since her divorce from England and Chelsea ace Ashley Cole, 31, in 2010 -- although there were rumours about her Friendship with dancer Derek Hough.

Cheryl's new man is believed to be a close friend of her mentor and confidante will.i.am.

Los Angeles-based Tre, who comes from New Jersey, has been a dancer for singer Leona Lewis and also appeared on 'American Idol'.

He graduated from university with degrees in finance and psychology.