The band were forced to cancel the UK date over health concerns.

For the first time ever, Pearl Jam were forced to cancel their second London tour date yesterday after lead singer Eddie Vedder began suffering vocal difficulties. They're expected to continue the tour later this week, providing that he gets the vocal rest he needs over the next couple of days.

The Seattle band were unable to complete the second of two shows at London's O2 Arena this week after Eddie lost his voice, but they insisted they were 'working on' a date to reschedule the concert and now expect it to come in 'mid-July'; possibly following the completion of their European dates and ahead of their US leg. Continue reading: The Music Of 'Twin Peaks The Return'

Vedder and two friends had been stranded at sea when Baxter, a Hawaiian sailor, picked them up in 2001.

The members of rock group Pearl Jam have donated $70,000 to a man who once saved lead singer Eddie Vedder’s life after a boating accident nearly 15 years ago.

Around 2001, Baxter saved the life of Vedder and two friends when a six-man canoe they had been paddling in overturned in the ocean after its mast snapped. He and his daughter Ashley had been sailing nearby when they heard voices calling for help, after the singer and his party had been stranded for nearly two hours. 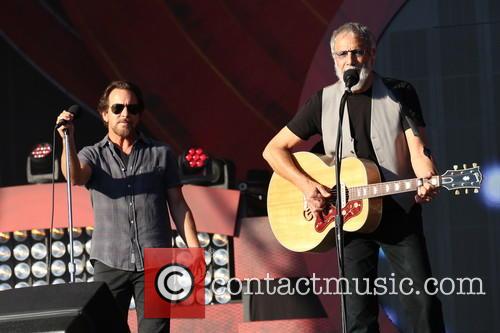 Pearl Jam Cover Frozen's 'Let It Go'. And It's Brilliant.

Seattle rockers Pearl Jam covered the smash hit Disney track ‘Let It Go’ from Frozen during a gig a Milan’s Stadio San Siro on Friday night (June 20, 2014). The band played their own take of the song during an extended version of their own track ‘Daughter’.

Originally recorded by Broadway star Idina Menzel, who voices Queen Elsa in the animated movie. Since it’s release last year, Frozen has become the highest grossing animation of all time and the fifth highest grossing movie of all time. It follows fearless optimist Anna who teams up with Kristoff in an epic journey in Everest-like conditions to find Anna’s sister Elsa, whose icy powers have trapped the kingdom in eternal winter. Oh, and a snow named Olaf is along for the ride.

Pearl Jam have struck us with a new album, we digest the reviews.

Rockers Pearl Jam have finally released their first album in four years, 22 years after their debut album Ten was released in 1991. Such a remarkable decade-spanning career in alternative rock is admirable, not to mention not losing any members, not selling out, and no major inter-band fight implosions.

Eddie Vedder's Back After His Ukulele Break.

The first single from Lightning Bolt, 'Mind Your Manners,' was released in July and brought three-minute, full-thrash and sing-along punk under a fast and shouty tirade from lead singer Eddie Vedder about religion. The song provides contrast against the more 80s power ballad stylings of 'Siren' and the REM 90s rock nods of 'Swallowed Whole.'

Eddie Vedder performed one of his most expensive gigs to date, with tickets going for $20,000 per-person as he opened up for President Barrack Obama at a private fundraising event for the President's re-election campaign.

Dressed in a suit and strumming a mandolin, this was by far one of Vedder's more unconventional performances as he serenaded the President and the 85 guests in attendance at the home of signer-songwriter Don Miggs and Lisa DeBartolo. DeBartolo is the daughter of Edward J DeBartolo Jr, the former owner of the San Francisco 49ers, and runs the family's charitable foundation that regularly runs fundraisers for the Democratic Party.

Vedder performed two Pearl Jam songs, 'Rise' and 'Without You,' before playing two covers, first James Taylor's 'Millworker and Neil Young's 'Rockin' in the Free World.' The rocker then went on to discuss one of Republican candidate Mitt Romney's comments on the '47 percent', referring to his own experiences in the past. 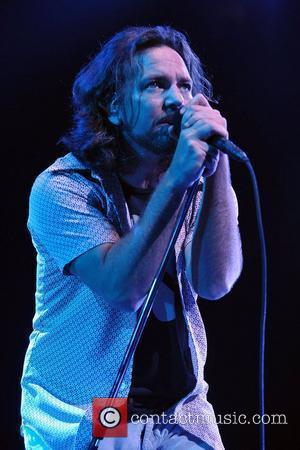