They perform 'City Boy' and 'Greyhound' on Jimmy Kimmel Live.

Finn Wolfhard from 'Stranger Things' made his musical TV debut as the frontman of his band Calpurnia this week on 'Jimmy Kimmel Live'. If you haven't already seen their videos, they call to mind that kind of 90s college rock ethos - and we can't get enough of them.

Finn Wolfhard at the MTV Movie and TV Awards

They performed original songs 'City Boy' and 'Greyhound', taking from their new EP 'Scout', last night (July 24th 2018) and they've already reached more than a hundred thousand views combined. Now, it wouldn't be honest to say Calpurnia were a ground-breaking, mind-blowingly masterful band, but there's something captivating and refreshing about this group of four Vancouver-based teens playing raw, angsty music and having real fun with it.

The main cast for the new animated film has been revealed.

'The Addams Family' is set to return in a new animated movie, and the freshly announced voice cast is very exciting. Charlize Theron and Oscar Isaac are leading the cast as Morticia and Gomez Addams, with Chloe Grace Moretz as Wednesday and Finn Wolfhard as Pugsley.

Charlize Theron at the 'Tully' premiere

MGM are launching an animated reboot of the creepy, kooky franchise twenty years after the macabre family last appeared on our screens. While the best known adaptations of the original Charles Addams comic strip have been the 60s black and white TV series starring Carolyn Jones and John Astin and the 90s feature film with Anjelica Huston and Raúl Juliá, it's not the first time the family have appeared in animated form.

By Holly Williams in Music / Festivals on 15 January 2018

The band release their first EP later this year.

If you didn't already know that 'Stranger Things' star Finn Wolfhard was actually super musical, his recent live cover of The Velvet Underground in Brooklyn ought to show you the extent of his talents. His band Calpurnia is also coming with a debut EP later this year.

The 15-year-old actor, who also appeared in the 2017 remake of 'It', performed a number of covers at his Rough Trade NYC show on Friday (January 12th 2018) with his band Calpurnia, including The Velvet Underground's 1967 hit 'Here She Comes Now' which was famously covered by Nirvana in 1991.

Continue reading: Finn Wolfhard Rocks Out To Velvet Underground With His Band Calpurnia

The unlikely franchise took over their Halloween night.

Jimmy Fallon was tasked with keeping the boys from 'Stranger Things' in line during an interview on his show, and while they are as boisterous as any of your average 13 to 16-year-old males, they do all have the same guilty pleasure: 'High School Musical'. Who'd've thought it?

The cast of 'Stranger Things' at season two premiere

Gaten Matarazzo (Dustin), Finn Wolfhard (Mike), Caleb McLaughlin (Lucas) and Noah Schnapp (Will) happen to be all friends outside of the world of 'Stranger Things', and even spent Halloween night together this year. However, what was meant to be a night of standard horror movies turned into one of singing along to the 2006 Zac Efron movie.

Stranger Things Is Back And Looking Better Than Ever

The anticipation has been growing, but we finally have confirmation of when Stranger Things will return to our screens. The hit Netflix series has been confirmed for an October 27th release via a poster showing our four main boys looking at an ominous red storm that's forming over the small town of Hawkins, Indiana.

In addition to the poster, we have also had more confirmation of just what to expect in the upcoming series - but it looks like it will be more than just a case of whether Will Byers will survive life in the retro sci-fi production.

Continue reading: Stranger Things Series 2 Release Confirmed And What We Know So Far

Whether you were born in the 70's, 80's, 90's or 00's the story of Pennywise the clown is one that's frightened many a child. Stephen King's 1986 book is behind hundreds of sleepless nights and a created a permanent fear of clowns in some of its readers.

Bill and George Denbrough are young brothers who live with their family in the quiet down of Derry, Maine; though the town is quiet there's a strange phenomenon surrounding it and its residents, six times the national average of grown adults go missing and that doesn't even include the missing children which are far higher.

One stormy day Bill makes his younger brother a paper sailboat which George is all too eager to go and try out in the rain. Donning his yellow raincoat, George goes out into the storm and loyally follows his boat. What happens to the boy next sets in motion a whole series of events that end in tragedy and add to the town's missing person total. 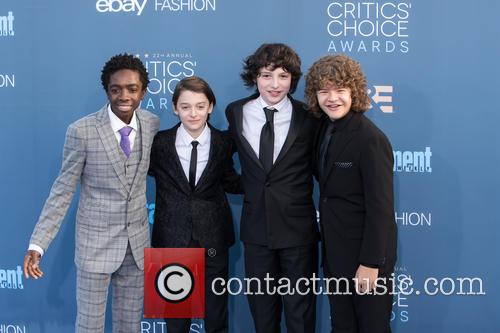