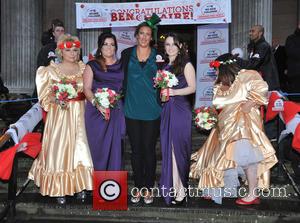 British comedienne Jennifer Saunders is celebrating after raising more than $16,414 (£10,590) for charity by taking part in a nighttime marathon walk in her underwear.

The funnywoman took to the streets of London for the annual Breakthrough Breast Cancer Research's Moonwalk on Saturday (11May13), in which participants wear their bras outside of their clothing to raise awareness of the disease.

Saunders, who beat breast cancer in 2010, and her team, Jen's Big T**s, donned their space-themed lingerie for the 26.2 mile (42-kilometre) trek, which kicked-off at 10pm local time - and they rewarded their efforts with a fry-up meal after they competed the marathon at 4.50am.

The star took to her Twitter.com page to inform fans about her progress throughout the challenge, but she suffered technical difficulties along the way, later posting, "My phone conked out (broke) early into moonwalk but we got round with all our knees and feet and had some jolly good chats!"