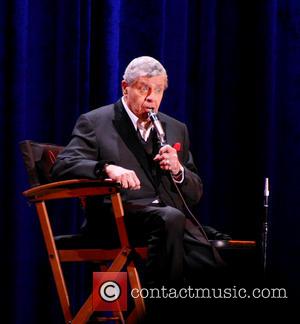 Jerry Lewis returned to the country where he is regarded as a veritable cinematic deity. At the Cannes Film Festival, where his film Max Rose is being screened out of the main competition, the 87-year-old comedian said that he had to put everything he had done in the past in a trunk in order to play the dramatic role of an elderly jazz musician in this film. It's a very difficult thing to do, Lewis said at a news conference prior to the screening. I felt every single moment of this film. ... It's an incredible, incredible movie that's going to give a lot of people a lot of pleasure. (In fact, Lewis's remarks came in response to a question about why he is so beloved in France. After his reply, he said soto voce. I didn't answer the question. I tell them anything I want, and they think I'm answering the question.) A reporter from Sweden asked him about a film he made in that country in the early '70s called The Day the Town Cried. A visibly emotional Lewis said that the film will never see the light of day because I thought the work was bad. And although I wrote and directed the film, I didn't make it accessible. ... It was all bad, and it was bad because I lost the magic. And that's all I can tell you about it. You'll never see it. No one will ever see it because I'm embarrassed at the poor work. And that's that. Every creator has the right of choice and he has the right of making final decisions that relate to the work. And I made a decision ...because I believed in the work and the way it should have been -- and it wasn't.