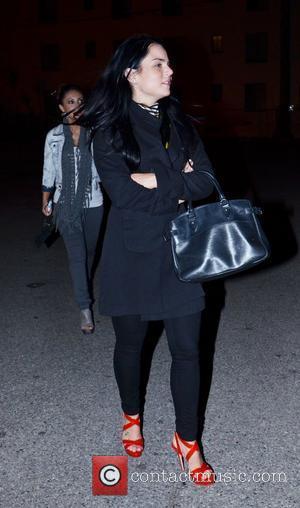 JoJo is set to release her third album 'Jumping Trains' inspired by best-selling erotic novel 'Fifty Shades of Grey' by E.L James.
The former 'America's Most Talented Kids' star (real name Joanna Levesque) showed off her latest single 'Demonstrate' to give fans a taste of her new project which she says is "taking a new shape'. Apart from drawing influences from nineties pop such as R'n'B artist Aaliyah and Genuine", JoJo admits to being inspired by the bondage novel that has been labelled 'mummy porn' in the media. "I will say reading 'Fifty Shades of Grey' kind of inspires me, it inspired my work", JoJo told MTV in a Skype interview. "It's some freaky sh--! I love it!' She believes it is a 'cool' novel for women and is 'bringing sexuality to the forefront".
However, when being asked if she'd be interested in playing the sexually submissive Anastasia in the upcoming film adaptation, she didn't think she'd be 'right' for the part. "I'm sure there's someone who can do a way more fantastic job then me", she said. She goes on to say that would really like to see 'Crazy, Stupid, Love' star Ryan Gosling picking up the part of the dominating Christian Grey: "I think that would be really dope".

JoJo to perform virtual gig for free on MelodyVR app

'It's been interesting': JoJo on promoting her album during a pandemic

JoJo has discussed a collaboration with Sam Smith

JoJo abstained from sex to learn how to be independent

JoJo struggles to 'trust' herself

JoJo opens up about clinical depression.