Can Anyone Beat Katherine Jenkins On Dancing With The Stars? 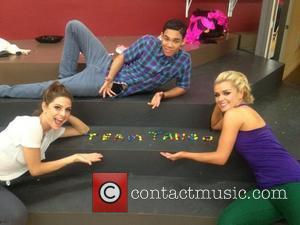 Picture: Katherine Jenkins posted this picture on Twitter with the caption 'Rehearsals for team dance are so fun!'

Katherine Jenkins is now the clear favorite to win this year's Dancing With The Stars as the competition reaches crunch time. Ironically, it was soul legend Gladys Knight who was eliminated during Motown week, despite label founder Berry Gordy cheering her on from the audience.
Top of the pack though was Welsh mezzo-soprano Jenkins, who impressed the judges once again with professional partner Mark Ballas. The pair danced to The Temptations hit track 'I Can't Get Next To You', and received a pair of 10's for an almost perfect score. Carrie Ann Inaba gushed, "Tonight, girlfriend, you let it loose. That was amazing!", before the total score of 29 out of a possible 30 was revealed. In fairness, Jenkins winning this year's mirror-ball trophy looks a foregone conclusion, though child actor Jaleel White upped his game for Motown week and also scored 29 out of 30 for his cha-cha to 'Ain't Too Proud to Beg'. After a couple of below-par weeks, head judge Len Goodman told him, "You're back!".
It seems as though Jenkins is already looking to deliver the knockout blow to her rivals, after she upped her training by working with a Thai combat sport instructor. According to the UK's Sun newspaper, Jenkins donned some boxing gloves and spent time learning the art of 'Muay Thai'