Jedward have been confirmed as housemates for 'Celebrity Big Brother' by their manager Louis Walsh. 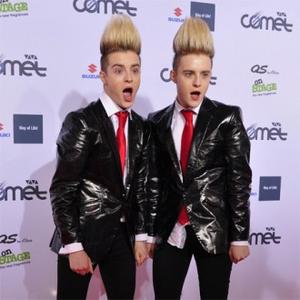 Louis Walsh has confirmed Jedward are going to be contestants on 'Celebrity Big Brother'.

The music mogul - who manages the Irish twins - has revealed the brothers are going into the house tomorrow (17.08.11) and says Channel 5 have given them a huge fee to take part.

Speaking on the red carpet at the launch of this year's 'X Factor' at London's The 02 today (17.08.11), he told BANG Showbiz: "It's a great move (for them). They're getting paid a lot of money for it and everyone loves them."

It has been rumoured for weeks that Jedward - John and Edward Grimes, who shot to fame as contestants on 'The X Factor' - are going into the house and they are set to be joined by Kerry Katona and her mother Sue, Pamela Anderson, Amy Childs and 'Big Fat Gypsy Weddings' star Paddy Doherty.

And host Brian Dowling has been calling for the housemates to "get naked" when the series starts.

The TV presenter - who has won 'Big Brother' twice - said: "I want the housemates to have loads of fun but I don't want them to be having sex on television. I just feel really uncomfortable about the whole thing. But definitely get naked, get your t*ts out, just don't do anything you'll regret."