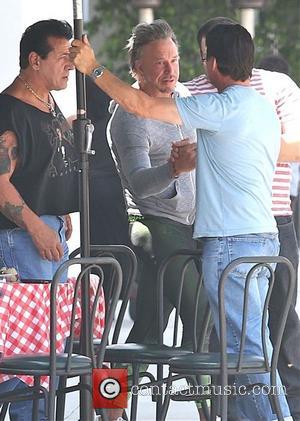 Actor Mickey Rourke has defended his decision to wear a T-shirt bearing an image of controversial Russian President Vladimir Putin, revealing the top was a charity purchase to help raise funds for a cancer-stricken kid.

The Sin City star, whose model fiancee Elena Kuletskaya is Russian, divided fans over his fashion choice on Tuesday (12Aug14), when he was spotted wearing the black and white shirt at a New York restaurant.

He insisted that donning the T-shirt wasn't his way of making a political statement, telling photographers, "Me and politics are like night and day. I never understand it, that's why I'm an artist/actor... I like Russia, but I love Usa."

However, he revealed the full story behind the T-shirt hours later, when he made an appearance on America's The Tonight Show Starring Jimmy Fallon, and claimed it was actually a show of support for a sick child he recently visited at a cancer hospital in St. Petersburg, for which Putin regularly stages fundraisers.

He explained, "I was walking down a street and I saw a big crowd of people and I said, 'What's going on?' and they said, 'Oh, they're selling Putin T-shirts...' I said, 'For what?' And, with all the stuff (political conflict) that's going on in the Ukraine and Russia, they (explained that) there's a little Ukrainian boy who's in this hospital in St. Petersburg, named... Zenya and he's got a spinal cord injury... He needs all these operations and Putin promoted this thing to sell T-shirts with his face on it to raise money for his operations."