Real Estate have gone through a significant period of change since they released their last record, Atlas, in 2014. Guitarist and founding member Matt Mondanile left the band to pursue his Ducktails project; songwriter Martin Courtney embraced family life, becoming a father of two and moving to upstate New York; bassist Alex Bleeker relocated to California, forming a considerable geographic gulf between band members; while guitarist Julian Lynch and keyboardist Matt Kallman, who'd previously toured with the group, joined the band in a more official capacity. With all this in mind, the release of their fourth album proved quite an interesting prospect.

Indeed, across the eleven tracks, Courtney's lyrics allude to that moment of change, although for him it doesn't so much concern the personnel changes within the band as much as his own transition between adolescence and adulthood. On "Same Sun" he asks 'where does one thing ever end and the next begin?' as guitars curl around the lazy backing vocals. The lyrical tone falls somewhere between a wistful nostalgia and a tentative anticipation of the future. But Courtney seems content, singing 'There's no place I would rather be right now, I'd love to never leave but I just don't know how' on "Stained Glass".

While the lyrics ponder a point of change, the musical leanings pick up where the band left off three years ago, with descending guitar lines, wallowing keyboards and shimmering percussion. Opening track and lead single "Darling" could have been taken straight from the Atlas sessions: an intricately picked guitar spirals above bright synth chords and a meandering bass line, before the vocals join the mix a minute and half in. But the similarity to Atlas - in terms of instrumentation and production - seems well thought out. It reflects a conscious decision on the part of the band not to reinvent themselves: to retain their musical identity amid all the changes going on around them. 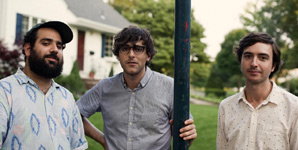 March 5th sees the release of the second single from Real Estate's 2011 album, Days. The video for 'Easy' sees the band represented by a street team with questionable promotional methods; forcing passers-by to listen to the band and trying to force radio DJs to play their record. The humorous video culminates in the street team kidnapping the DJ in their Real Estate-branded van.

Real Estate's new single, It's Real, is the lead single taken from the band's second album, Days, which were both released in October 2010. The band will be playing the Scala in London on December 6th, 2011, following four UK dates in October 2011 to mark the release of Days.

Outside it may be a bleak November day, probably raining too, but inside New Jersey natives Real Estate's sophomore album Days, it is summer all the time. After the success of their acclaimed 2009 self-titled debut the band have had a lot to compete with, and with an album stifled with soft melodies, expansive arrangements and a sense of mundanity and melancholy in the music and lyrics, the trio have done very well to compete with Real Estate.