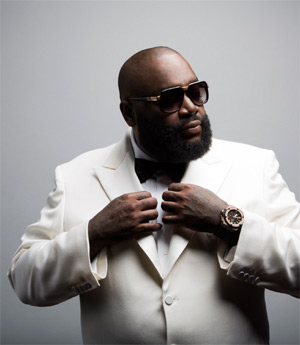 Grammy®-nominated Def Jam Recordings/Maybach Music Group hip-hop magnate Rick Ross follows up last week's release of his new single "No Games" featuring Future, from the eagerly anticipated new album MASTERMIND, with the announcement of his next solo headlining tour of the U.S., presented by AEG Live.  The 8-city tour will open November 12th at Masonic Temple Theatre in Detroit, and end with a homecoming show in Ross' native Miami, at the Knight Center on November 23rd.

Rick will team up with the famed "1500 Or Nothin" Band for the tour, for which he has prepared a brand new show with a look and sound unlike anything anybody has seen from him before.  "The Fifteen Hundreds," as they are often referred to, are a 5-piece band who have toured the world with many multi-platinum artists including Snoop Dogg, Lupe Fiasco, T.I., The Game, and Faith Evans.  Ross and the band previewed the show last month at an sro concert event at Club Nokia in Los Angeles, broadcast live nationwide on AXS TV.

"It's never been done like this," Ross says.  "We'll be performing everything from 'Tears of Joy' to 'Aston Martin Music,' all with a live band.  It's time to remind everyone what Maybach Music is all about."  With a library of chart hits and critically acclaimed studio albums, and the luxury of having the Maybach Music Group roster to call on, Rick Ross and "The Fifteen Hundreds" will have no shortage of material.  The hottest MC in the game is looking forward to further solidifying his dominance in the music industry.

The tour will coincide with the release of MASTERMIND.  "No Games," produced by J.U.S.T.I.C.E. League, which impacts radio and iTunes on October 1st, is the first advance track from MASTERMIND.  The new album is the follow-up to Rick's controversial God Forgives, I Don't (released July 2012), his fourth album to debut at #1 Soundscan, following in the tradition of Port Of Miami (2006), Trilla (2008), and Deeper Than Rap (2009).  In addition, Warner Bros. Records will be releasing Maybach Music Group's Self Made 3 album on September 17th.

About Rick Ross:
Six-foot-two, 300-pound Rick Ross - a "hip-hop heavyweight," as described by the New York Times, began the climb to world-wide super stardom with 2006's Port Of Miami, his #1 Pop/#1 R&B/#1 Rap major label debut album. The street anthem "Hustlin'" became the first master tone ever certified platinum by the RIAA for sales of 1 million copies before the associated album had even been released.  Port Of Miami's second single, "Push It," whose movie soundtrack excerpts (circa 1990) from Giorgio Moroder's "Scarface (Push It To The Limit)," evoked the gritty soul of Miami, a city that Ross embodies.  Ross's dominance in the game was further solidified with 2008's Trilla, whose second single release, "The Boss," featuring T-Pain, rose to #2 on the Billboard Hot Rap chart, #5 R&B, and Top 20 on the Hot 100.  The next single release, "Here I Am" featuring Nelly and Avery Storm, also hit inside the Top 10 on the Rap and R&B charts.

A year later, the Bawse delivered again with 2009's Deeper Than Rap, which was named the #4 top-selling hardcore hip-hop album of 2009 by Interference.com, in the company of releases by Jay-Z, Kanye West, and Lil' Wayne. Deeper Than Rap got a big jump out the gate with its first single, "Magnificent" featuring John Legend, produced by J.U.S.T.I.C.E. League, Top 5 on Billboard's Hot Rap Tracks chart and Hot R&B/Hip-Hop Songs chart.  Continuing to reign supreme, Ross' 4th album, 2010's Teflon Don debuted at #2 on the Billboard charts.  It spawned a slew of hits including the #1 single "Aston Martin Music" featuring Drake and Chrisette Michele, as well as Top 10 singles "BMF (Blowing Money Fast)" and "Super High" featuring Ne-Yo.

After launching Maybach Music Group and signing artists like Meek Mill and Wale, the hottest MC in the game released the most anticipated album of 2012, God Forgives I Don't which was released in July and sold 220,000 copies in its first week, becoming his 4th #1 Soundscan debut and his biggest first week sales to date.  The project included top hits such as "Touch'N You" featuring Usher, "So Sophisticated" featuring Meek Mill, and the fan favorite "Diced Pineapples " featuring Drake & Wale. In 2013 Rick Ross continues to supply the streets with heat.  He has been featured on some of hip-hop's hottest albums including Jay-Z's Magna Carta Holy Grail and Wale'sThe Gifted, building anticipation for his 5th studio album 'Mastermind' slated to be released later this year.