Celebrities And Socialites Attend Donatella's Showcase For Versace Versus Line

By Victoria Pavlova in Lifestyle / Showbiz on 17 May 2013

By Lorna Greville  in Lifestyle / Showbiz on 16 January 2013

Up and coming female rapper Angel Haze developed some pretty series Twitter beef with Azealia Banks. However, in a home made YouTube video, Haze has apologised for her behaviour, admitting that she feels she behaved like a bully.

At the time of the argument, reports said that Haze and Banks had disagreements going back a while, but it all came back after Haze retaliated to a general tweet from Banks that she felt was aimed at her. It all spiralled out of control and producer Diplo was brought in on it. Plus, Banks ended up using a homophobic slur - she has since deleted the tweet and apologised for it, but that's the scale the argument got to.

Although Haze doesn't refer directly to Banks, there isn't really anyone else that an argument has erupted with via the social networking site. "I really do apologise for all of the stuff that has happened recently," she said. "I don't like the fact that I was a bully in a certain way and I don't like the way that I came off. I came off as a bully." Before finishing thanking her fans for their support and letting them know she loves them.

Continue reading: "I Came Off As A Bully" - Angel Haze Apologizes For Twitter Feud With Azealia Banks

By Victoria Pavlova in Lifestyle / Showbiz on 06 January 2013

Celebrity Twitter wars are a big deal apparently and this one was no exception – gossip blogger Perez Hilton and rapper Azaelia Banks battled it out online, leaving neither of them unscathed.

The whole “beef” actually started between Banks and Angel Haze on Thursday, when the latter took offence to Azaelia’s statement about non-New Yorkers. The battle quickly escalated and, after Perez chimed in on Haze’s side, he got a good helping of insults hurled at him too, including a gay slur.

A selection of Azaelia’s tweets include: “@PerezHilton omg u should just kill yourself … Like for real” and “@perezhilton lol what a messy faggot you are.” Way to stay classy there. To her credit, Banks did give a half-hearted non-apology afterwards, explaining that “A faggot is not a homosexual male. A faggot is any male who acts like a female. There's a BIG difference.” She later commented on the incident: “My most sincere apologies to anyone who was indirectly offended by my foul language. Not sorry for Perez tho. Lol.” and “Really not as moved by this f word thing as u all want me to be. As a bisexual person I knew what I meant when I used that word.” Well, that was… something.

Diss-Harmony: Is Angel Haze’s 'Shut The F*ck Up' The End Of Her Feud With Azealia Banks?

Most artists nominated in this year’s BBC Sound of 2013 shortlist will have been celebrating politely since their names were announced. Not so for Angel Haze, who instead has been feuding with fellow rapper Azealia Banks on Twitter.

The beef has spilled out into the recording studio, where both artists have recorded tracks dissing the other. Angel Haze’s latest attack, entitled ‘Shut The F*ck Up’ comes with the additional insult of being unmastered, as Haze claims that Banks isn’t worth the studio time to get the track finished properly. That’s a proper musician’s insult, that one.

‘Shut The F*ck Up,’ starts with a pretty vicious attack on Banks’ appearance and, well, continues in pretty much the same manner, “my whole style is really f*cking outta your range… when I see you all I wanna do is step on your jaw.” Now now, ladies, play nice. This is the second track that Angel Haze has recorded, aimed at Azealia. The first was ‘On The Edge,’ which featured the lines “b*tch, I got ammo on you… I been making moves, b*tch, plotting my fate, looking at you whack ho’s like ‘whose spot should I take?’”

Continue reading: Diss-Harmony: Is Angel Haze’s 'Shut The F*ck Up' The End Of Her Feud With Azealia Banks?

By Lorna Greville  in Lifestyle / Showbiz on 04 January 2013

Twitter has made celebrity feuds much more frequent and much more fun. The latest spat is between Azealia Banks and New York rapper and singer Angel Haze, who has just been included in the nominated list of BBC's Sound of 2013 (regardless of the outcome of this argument, she's definitely one to watch).

Apparently, Banks and Haze have 'beef' going back a while, but it came to a head via Twitter lately, when Haze retaliated to a tweet left by Banks which was indirectly aimed at Haze- or so Haze claims. The retaliation came in the form of a threatening tweet (which has since been deleted). Banks then said:

WOW.... did angel haze just threaten to cut me because of a very general tweet i sent about non-new yorkers claiming NY?! 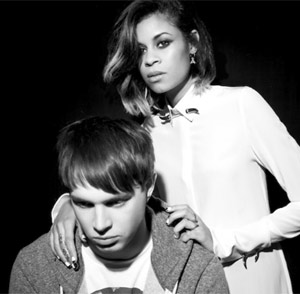