Anna Calvi (born 24.09.80)
Anna Calvi is an English singer/songwriter, best known for her eponymous début album which was released in 2011.

Net Worth: According to Celebrity Net Worth in 2013, Anna Calvi has a net worth of 5 million USD.

Childhood: Anna Calvi was born in Twickenham, England to a pair of therapists. She was born with a problem with one of her hips which led to her spending a large amount of her first three years in hospital. At the age of six, she began learning to play the violin and at the age of eight, she began playing the guitar. She began to experiment more with her music in later years, and was working on overdubbing at the age of 10. She studied violin and guitar at the University of Southampton, graduating in 2003 with a Bachelor of Arts in Music.

Career: Calvi worked as a guitar teacher after her graduation in order to raise money to begin her music career in 2010. She began performing with a small band named Cheap Hotel, although after one single, the band broke apart. After gaining a new drummer and an additional instrumentalist, Calvi began recording various musical covers as attic sessions. After gaining a small following, Calvi released her debut solo single, 'Jezebel' in in October 2010. The single was a cover of the 1951 Wayne Shanklin song. The following year, Calvi released her self-titled debut album under the Domino record label. Her début album saw critical acclaim and Calvi began work on her second studio in 2013. 'One Breath' was released three years after Calvi's début album, and saw mass critical acclaim, averaging four stars or 8/10 from most critics. In the following year, Calvi released her first EP, entitled 'Strange Weather'. The July 2014 EP was composed of a collection of cover songs recorded in New York. While the reviews were favourable, it saw noticeably lower scores than Calvi's first two albums.

By Andrew Lockwood in Music Reviews on 09 October 2018

'Garrulous, loquacious, verbose, effusive, chatty'; this is not how you would describe Anna Calvi. Aside from name-checking her band and saying a couple of thank yous, Anna didn't speak tonight. Focused, possessed behind the eyes and as psyched as a matador facing down his prey in the 'tercio de muerte' would certainly more accurately describe her stage presence.

In the serene surroundings of Hove's All Saints Church, Calvi took to the dimly lit stage below the magnificence of the vaulted ceiling of the late 19th century, still incomplete, J.L. Pearson designed, formidable parish church. Dressed in signature red and black, with matching scarlet lips and tousled hair, Calvi substituted a muleta for a number of guitars as she mesmerised and delighted the crowd before her.

With the recent release of her third, very well received album 'Hunter' just behind her, Anna had plenty of relatively new songs to showcase. In the thirteen-track setlist, it was her latest release that took up the majority, whilst her debut made up largely for the remainder. Anna's Mercury-nominated second album 'One Breath' was tonight assigned to history with not one of its original tracks given an airing.

The two-time Mercury Music Prize nominee said that the image to which female performers are expected to conform are becoming increasingly unrealistic.

Anna Calvi has spoken out against gender bias in the music industry in a new interview about her experiences throughout her career, saying that “you don’t notice it, yet it’s everywhere.”

The 34 year old singer and songwriter, who hails from London, spoke to The Independent on Sunday about sexism in the industry, among other things, and how it’s changed her outlook since her 2011 self-titled debut album. David Byrne has announced the first slate of acts for Meltdown Festival 2015, which he curates at the Southbank Centre in London from 17-30 August. The bill is unsurprisingly varied and eclectic and includes pioneering postpunk minimalists Young Marble Giants and singer-songwriter Anna Calvi. "Some of my choices come from the European continent - artists I have seen live or have their recordings on constant replay," Byrne said. "So in some sense, my suggestions have been a little more Euro-international than some previous Meltdowns. I'm not bragging and please let's not pull the 'world music' tag out - these are great contemporary artists from our neighbours, who, like many local artists, draw from a deep cultural well." 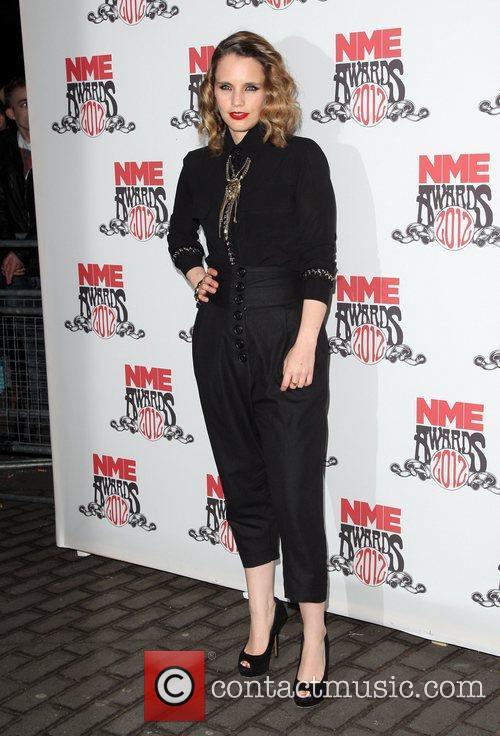 Anna Calvi's 'Desire' is the second single to be released from her self-titled debut album and was released on June 20th.

Domino Records released Anna Calvi's single 'Blackout' on March 21st 2011, this is the first track from her self-titled debut album and is available to buy on 7" and as a digital download. The video for the track was directed by Michael Baldwin and perfectly captures Anna's passionate style.

By Andrew Lockwood in Music Reviews on 08 December 2010

Mentored by Brian Eno. Signed by Domino Records after a tip off from former Coral guitarist Bill Rider-Jones. Supporting Interpol and chosen as support, to both fan and influence Nick Cave, for Grinderman. Already feted and tipped for success by the likes of XFM, AirHammer and Lightspeed Champion. One debut single release to date, in the form of a cover version of 'Jezebel', and Anna Calvi is on the long list for BBC Sound Of 2011. So, is the attention, praise, adulation and well intentioned speculation justified?

Anna Calvi has spent the best part of the last three years crafting her debut album in dingy basements, a French analogue bedecked studio and her regular home in London. The half Italian, Edith Piaf loving Music degree graduate had to overcome her shyness of singing before she was able to fully flourish as the lead in her talented trio. She has written and co-produced her self titled debut album on which she has also played and arranged the strings, and sung the choral backing to accompany some of the tracks.