Cheryl Cole Cements Return To Music With No.1 Single 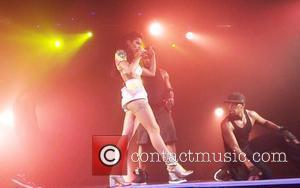 Cheryl Cole has fully announced her return in fine style by shooting straight to the top of the UK singles charts with her new hit 'Call My Name'. To add extra joy to the news was the fact that Cole scored the fastest-selling number one hit of the year so far in the country, with the track selling a solid 152,000 copies in its first week of release to top the chart ahead of her 'X Factor' judging successor Gary Barlow and his Commonwealth Band.
Barlow's track 'Sing', written especially for the Queen's jubilee had previously been the fastest selling of the year at 142,000 sold, but its two-week reign at the top of the charts was ended and it now sits at number three, with US rapper Flo Rida a non-mover at two with his single 'Whistle'.
For Cole it marks the first single to be released simply under her Christian name, and is her third number one after hits 'Fight For This Love' and 'Promise This'. For Barlow meanwhile redemption came in the UK album charts in which his Commonwealth Band managed to stay top of the pile for the second week in a row, Scottish singer Amy Macdonald coming in at two with her new album 'Life In A Beautiful Light'.