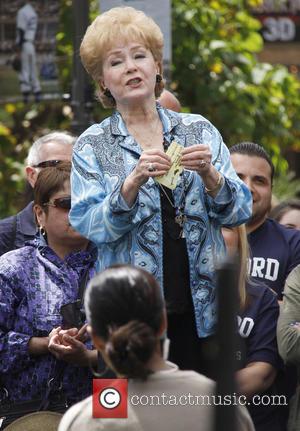 Hollywood veteran Debbie Reynolds helped introduce her son to sex by inviting a London club owner they met at a Mick Jagger party to live with them at the Savoy Hotel for three weeks.

The actress/singer took her 16-year-old son Todd and daughter Carrie Fisher to the party during an extended stay in the English capital back in 1974 and was thrilled when the teen struck up a 'friendship' with a beauty in her mid-20s.

She recalls, "Todd met a wonderful girl there and she stayed with us (for) three weeks... I invited her because I thought it would be a great way to introduce Todd to sex."

Reynolds tells U.S. news show Access Hollywood, "Her name was Elizabeth... She owned a nightclub there, she was beautiful, she was about 26 and she was gorgeous, she looked like Brigitte Bardot and she just thought Todd was delicious... so I said, 'Why don't you stay over?'

"We were at the Savoy Hotel... I had all kinds of suites and things."

But while she was keen to introduce her son to sex, Reynolds didn't want her kids experiencing the other adult pleasures at Jagger's party.

She adds, "He came over to me and he said, 'Don't let them go upstairs because really it's nothing that the children should see...' There was white stuff and it's not snow... But we had a wonderful time, the kids had a great time."

The Jagger party and her son's romance are two of many stories that feature in Reynolds' new memoir, Unsinkable.