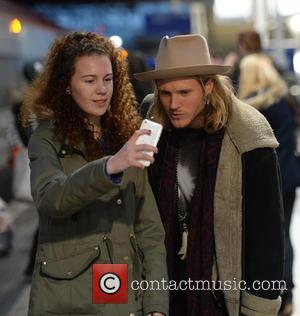 Picture: Dougie Poynter - The McFly Members of pop rock supergroup 'McBusted' which is a mixture of the bands McFly and Busted were photographed as they...

The MCFly bassist checked himself into rehab in 2011 to be treated for substance abuse and depression after he attempted suicide following his break-up from The Saturdays singer Frankie Sandford.

He spent more than a month in the facility and has been sober ever since he was discharged, and he reached the four-year sobriety milestone on Valentine's Day (14Feb15).

Poynter's girlfriend Goulding jetted out to Australia, where he is touring with his supergroup MCBusted as an opening act for One Direction, so they could celebrate both the romantic holiday and the personal landmark together.

Goulding posted a picture on Instagram.com showing the musician backstage at a gig in Melbourne and wrote, "This amazing man is four years sober today. What a legend."

Dougie Poynter: Ellie Goulding has better style than me

Dougie Poynter vows not to duet with Ellie Goulding

Dougie Poynter Moving In With Frankie