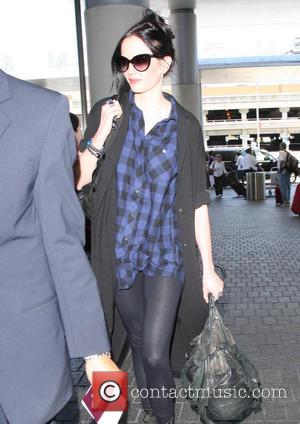 French actress Eva Green loves her nude scenes in Sin City: A Dame To Kill For because they're just as stylised as director Robert Rodriguez promised her they'd be.

The former Bond girl portrays temptress Ava Lord in the new film and admits she put her faith and trust in her director when he asked her to bare all for revealing scenes.

She explains, "He came to my trailer and swore to me that I would look amazing with the right lighting and the right shadows. You always feel quite vulnerable when you're naked on a set and you feel quite silly. With the green screen around you in your tiny thong, it's not that sexy. You trust their vision and it looks stunning. It's not vulgar and it's not indecent. It's not realistic. It's beautiful, I think."

But Rodriguez stopped short of asking his leading lady Jessica Alba to bare all for the cameras, even though her stripper character Nancy Callahan is often topless in Frank Miller's graphic novels.

He says, "When I had seen the book originally it was drawn a certain way. Frank drew these never to be movies. You couldn't find an actress of any calibre for the first movie because she was walking around topless all the time; even when she wasn't dancing.

"It was very stylised, so I knew Jessica wouldn't do topless. It was that hard thing where I could either get someone who's just like the book but can't act like Jessica, or I can get Jessica and we can just cover her up.

"People to this day think she was naked because she does it so sexy and some things were exposed. There wasn't any nudity in the first one; it was all in the mind so we could suggest a lot with costume and attitude."

And modest Alba, who famously has a no nudity clause in her contract, admits she had a ball playing a clothed Callahan in the sequel.

She adds, "In the first film I was 21 and was so young and not really comfortable in my own skin, being on a stage and dancing. It was all kind of terrifying to me. I was terrified. I didn't want to make a misstep and disappoint anyone. In this one I felt more confident and comfortable in my own skin. If I'm gonna be able to do movies I might as well go 150 per cent and really push it and be fearless. That's kind of the attitude I took this time."

And the mum-of-two didn't have to work too hard maintaining her toned physique: "The role kept me energised. I ate a lot of vegetables. You really don't want to eat tacos and burritos all day when you're in a dance costume!"