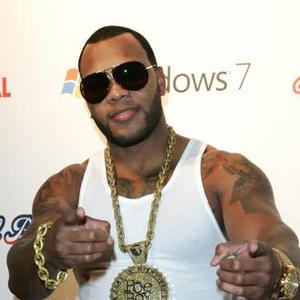 The 'Whistle' rapper has had huge hits produced by David Guetta and Axwell, and wants to continue his winning streak by teaming with Calvin, who has been behind tracks for Rihanna, Scissor Sisters, Dizzee Rascal and Cheryl Cole.

He told the Daily Star newspaper: ''I did a remix of a Calvin track off my own back, like a bootleg, and I'm sure his camp must have heard it by now. Hopefully, Calvin will get the message.''

Flo Rida - real name Tramar Dillard - puts the huge success of tracks such as 'Good Feeling' and 'Wild Ones feat Sia' down to the fact he always plans for his songs to have international appeal.

He said: ''I've travelled around the world within the five years I've been doing this professionally and got some of the greatest producers on my albums.

''I'm familiar with my whole fan base [around the world] and I make sure each single has the capability to be a number one record.''

The pop-rapper added another key to his success - which has seen him score number one singles in the UK, US and Australia - is down to the fact he always has a positive message.

He said: ''I get calls from little kids to older adults who definitely appreciate my music. They tell me how positive it is. I go on Twitter and I get a lot of positive feedback.''