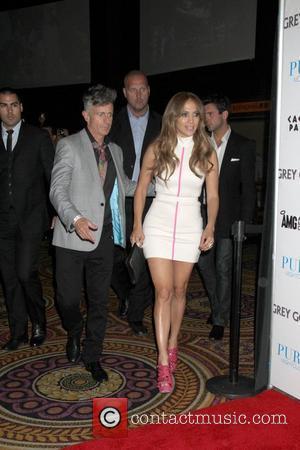 Jennifer Lopez became teary eyed during her performance in Connecticut on Saturday (22nd October 2011), but the R&B star denied she choked up because of her failed relationship with ex-husband Marc Anthony.
During her rendition of 'Until it Beats No More', several dancers appeared dressed up as men from Jennifer's past, including P Diddy, Cris Judd and Ben Affleck, with the teary singer telling the crowd, "I took a trip down memory lane". However, a source close to the star told Tmz.com it wasn't her exes that brought the 42-year-old to tears. In fact, it was a picture of Lopez with her children displayed on the giant screen at the Mohegan Sun Arena that caused the upset. The insider claims the shot - taken for a Gucci advert last fall - has serious sentimental value to the singer and the already emotional performance of 'Until it Beats No More' had sent her over the edge. She and estranged husband Anthony have twins together, born in 2008. The couple announced in July 2011 that they were separating after seven years of marriage.
Following the split, People Magazine reported that Jennifer had purchased a $18 million, seven bedroom property in the Hamptons. The 14,000-square foot home lies in the exclusive Water Mill area.