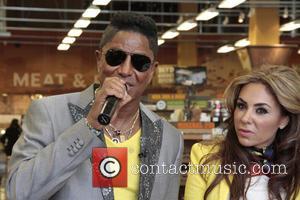 Jermaine Jackson is not a fan of his late brother's 'new' album because it doesn't sound like the Thriller hitmaker singing the songs.

The singer, who has become one of the most outspoken Jacksons following Michael's death in 2009, reveals he and his brothers and sisters were not even asked for their approval before posthumous recordings like the hit Love Never Felt So Good were released on Xscape earlier this year (14) - and he, for one, finds it difficult to listen to the unreleased recordings.

In a new interview with Oprah Winfrey, which will air in America on Sunday (17Aug14), he says, "I'll just say this - Michael has a way of doing things. What I'm hearing is not Michael at all.

"If Michael wanted this stuff out, he would've put it out. Bottom line. And for them (producers) to take this, and I'm going to say them, because they know who they are, and to put all these hip-hop beats to it, and this and that... Michael would die over again if he heard what they were doing."

And Jermaine also disapproved of the way the album was promoted at the Grammy Awards earlier this year (14) - with a performance featuring a hologram of the late King of Pop and Usher.

He adds, "My 17-year-old son called me and said, 'Dad, did you see what they did to Uncle Michael?' I said it didn't even look like him. It didn't move like him, and it seemed like it was a body double. I wasn't happy once I saw it later. It's not good."