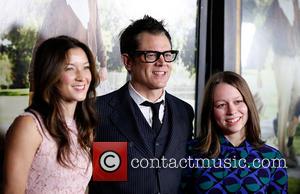 The man behind Johnny Knoxville's new movie hit Bad Grandpa and the Jackass films has been tapped to take charge of the upcoming Motley Crue biopic.

Director Jeff Tremaine will tackle the adaptation of the band's 2001 autobiography The Dirt: Confessions of the World's Most Notorious Rock Band.

Tremaine tells Deadline.com, "I've been careful to make this a natural progression. I've been offered a lot of scripts, but Dirt is something I pursued with everything I had. I've wanted to make this going back to 2001, when we were just planning the first Jackass movie and I found out that David Gale at MTV Films had just optioned the book.

"First of all, I had no idea how to make Jackass into a movie, but I said to him, 'Let me direct that movie, too'. He said, 'Yeah, of course!' He was being sarcastic, because he had the same level of confidence in me as a director as I did at that time.

"Now it's important to get actors who play, or who understand how to deliver the charisma it takes to be onstage. Rock stars have a swagger. Some of what they went through is funny, but overall this movie is not going to be a comedy. It's pretty dark. I think fans of what I've done will like this movie, but it's not going to make you fall out of your chair laughing."