Metz are in a tight spot. No matter how they sound or what they do, being a three piece guitar band releasing music on Sub Pop, it was almost inevitable that the press would latch on and make comparisons to Nirvana, Sub Pop's most famous guitar trio. It seems no matter what they do, Metz will always be described as 'the new Nirvana' or as a grunge band. There is nothing wrong with Nirvana or grunge, but Canada's Metz are definitely neither the new Nirvana, nor even an especially grungy band. 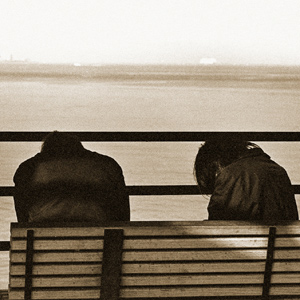 On their unimaginatively titled second album 'II', it's more or less business as usual for Metz, treading largely the same ground as their self-titled debut. Luckily for us, that first album was sublime, and this sophomore effort is of a similarly high calibre. Metz deal in a scuzzy, noisy, Drive Like Jehu/Melvins kind of noise rock, and they are best consumed loud.

The LP opens up with 'Acetate', which as an opener is everything you hoped it would be. There is a ridiculous amount of distortion, a relentless drum attack and an absolutely monstrous, devastating chorus. Next up is 'The Swimmer' which takes the Metz blueprint and adds a mechanical percussive attack. It's a little different to their usual fare but it's still insane, it's still terrifying and it's still utterly brilliant.