Mila Kunis On Ashton Kutcher Rumors: A Friend Is A Friend 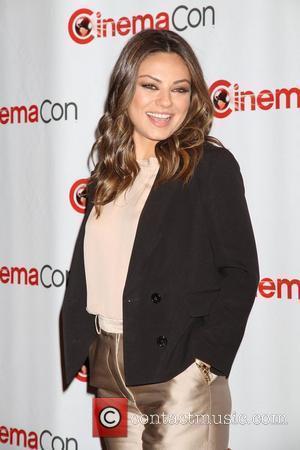 Mila Kunis has finally broken her silence on rumors that she and Ashton Kutcher are romantically involved. Extra's Ben Lyons caught up with the actress at CinemaCon 2012 in Las Vegas, where she responded to speculation that she and her 'That 70's Show' cast-mate are more than just friends.
The pair have been spotted together numerous times in the last few weeks, and were even snapped furniture shopping before retiring back to Kutcher's new Los Angeles pad. However, Mila wouldn't be drawn into the speculation, simply telling Lyons, "It's absurd! A friend is a friend". She was far more confident in talking about her new movie 'Oz: Great and Powerful', explaining, "Oz: Great and Powerful.I play Theodora, one of the witches. Any time you can fly and be angry about it, it's pretty awesome." Her co-star James Franco added, "I guess it hasn't sunken in that I'm the Wizard of Oz". Sam Raimi's prequel to The Wonderful Wizard of Oz tells how the Wizard initially arrived in Oz and became the ruler. As well as Kunis and Franco, the all-star cast also includes Michelle Williams as Glinda, and Rachel Weisz as Evanora.
Despite the actress' comments, the rumors surrounding Ashton and Mila are likely to continue as long as the pair remain single. Kutcher is currently in the process of divorcing from Demi Moore. A source close to the former cast-mates told People magazine, "They're both single, having fun.There's nothing serious going on - just friends having fun".