They've been on texting terms since meeting last year.

As odd friendships go, few are as unexpected as that of Drake and Millie Bobby Brown's. But since the latter has become a superstar, it seems her social circles have broadened considerably. Not everyone thinks it's healthy, but who wouldn't want to be besties with the 'Stranger Things' icon?

At just 14-years-old, it might sound strange that she is hobnobbing with celebrities more than twice her age, but 31-year-old Drake is turning out to be her go-to contact for boy-related advice. And having recently broken up with her boyfriend of 7 months Jacob Sartorius, she needs all the help she can get.

'Godzilla: King of the Monsters' will be released next year.

The very first teaser trailer for the forthcoming 'Godzilla' sequel is unveiled but, before you get too excited, it's worth noting that it gives absolutely nothing away. It's just forty seconds of Millie Bobby Brown's most ominous acting, but we're already eager for the next clip.

All we get from the plot of 'Godzilla: King of the Monsters' is that Project Monarch is still very much active, but it's been hugely compromised. The teaser clip sees a casually dressed Millie as Madison Russell with white wraps on her hands, attempting to access Monarch Sciences via a radio system which appears to be set up in someone's home.

Brown has deactivated her primary Twitter account this week, which had 2.3 million followers, apparently in response to the meme.

Millie Bobby Brown has deleted her Twitter account after being on the receiving end of a targeted campaign of homophobic abuse.

The 14 year old actress, one of the young stars of Netflix’s smash hit ‘Stranger Things’, has been the face of an ironic Twitter trend in which Snapchat photos and footage of her have been edited to make it seem as if she’s endorsing hatred of gay people. In reality, Brown is one of the most vocal champions of LGTBQ+ rights.

She is being criticised for kissing her boyfriend of seven months.

It's hard enough going through puberty without having to do it in the public eye. Millie Bobby Brown is clearly finding teen life hard under such a spotlight, and it's forced her to delete a lovely snap of herself and her boyfriend innocently sharing a kiss on the beach on social media.

The 14-year-old 'Stranger Things' star has been dating her boyfriend Jacob Sartorius since October - and seven months is a long time for a teenager. She's constantly being accused of growing up too fast though and, for a lot of fans, proof of that came with a photo of her kissing her boyfriend against a nighttime beach backdrop. Her beautiful caption read: 'Moonlight with him'.

'Stranger Things' is without a doubt one of the most popular Netflix original shows available. Through two seasons to-date, creators Matt and Ross Duffers have brought to life the fictional town of Hawkins, Indiana, and an eclectic bunch of characters, both young and old.

One fan-favourite character is Eleven - a young girl played by Millie Bobby Brown, who's been taken in and under the wing of Police Chief Jim Hopper (David Harbour). With a shady past and plenty of people who would rather see her out of the public eye and drawn back into the shadows, Eleven has an uphill battle if she's to enjoy as close to a normal existence as possible.

By Holly Williams in Lifestyle / Showbiz on 20 April 2018

The world's 100 most influential people have been named for 2018, and making history by landing on that list is Millie Bobby Brown. She was among the artist category, and writing their statement about just how inspirational she is was her good friend and superfan Aaron Paul.

The 'Stranger Things' star is now the youngest person ever to have made the Time 100 list, being just 14-years-old. But it's well deserved. She joined the likes of Tiffany Haddish, Nicole Kidman, Roseanne Barr, John Krasinski, Cardi B, Hugh Jackman, Meghan Markle and many more on the most respected showbiz list of the year.

The creators of the show opened up about the new season at PaleyFest.

'Stranger Things' fans can start getting excited again as it's revealed that production for season 3 is set to begin this month. Few details have been revealed about the new season, but the cast and creators did give a hint as to what to expect during their PaleyFest panel discussion.

There's been something of a silence following the end of season 2 of the Netflix show. It seems Eleven, Lucas, Mike, Will and Dustin had finally managed to defeat the demogorgons with the help of some new faces, with the Mind Flayer having been forced back into the Upside Down. So what's next for these kids?

Continue reading: What We Know So Far About 'Stranger Things' Season 3

When no-one showed to a young fan's birthday bash, the cast stepped in with words of comfort.

Say what you like about 'Stranger Things', but those young actors are without doubt the sweetest people on this Earth. Millie Bobby Brown and Gaten Matarazzo made one fan's day after comforting them when no-one showed up to their incredible 'Stranger Things' themed birthday party.

The cast of 'Stranger Things' at season 2 premiere

For most of us, if someone we know was throwing an Upside Down party, we'd be there in a flash. But one young Filipino boy was left distinctly disappointed when none of his friends turned up for his bash - a real shame given the amount of effort that had clearly gone into preparations. His older sister took to Twitter to share the sad story.

The series doesn't look set to return until 2019.

Details surrounding the third season of hugely successful Netflix original series 'Stranger Things' have been sparse, but it's now been revealed exactly when the batch of new episodes will start shooting - and just how many episodes will make up the series' third outing! What we already know is that season 3 will include a time jump so that the rapidly ageing's cast won't be a problem for settling into the "reality" the show wants to capture. How far the jump will send viewers and characters into the future however remains to be seen. 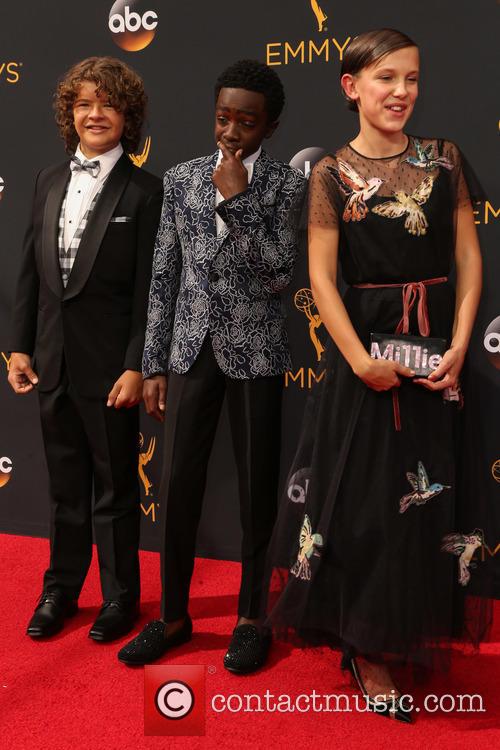