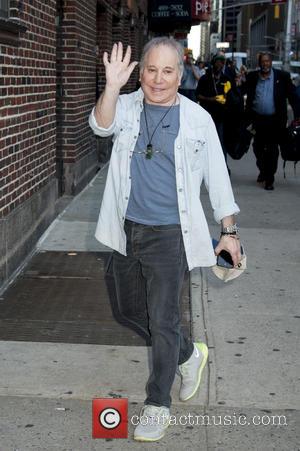 The mystery band was announced as part of the musical line-up for the premiere week of The Late Show with Stephen Colbert, and on Friday, the group took to the stage at the CBS network's New York studio to perform.

Colbert introduced the lead singer as "Alan", but eagle-eyed viewers quickly realised the star was none other than Simon himself, who played along with the joke as the presenter asked the You Can Call Me Al hitmaker, "Can I call you Al?".

Simon then proceeded to belt out his tunes American Tune and Me and Julio Down by the Schoolyard, with the TV host joining in and taking over the whistling solo on the latter.

The band's name, Troubled Waters, pokes fun at the fall out between the singer and his former Simon & Garfunkel star, Art Garfunkel, and takes its name from their signature song, Bridge over Troubled Water.

Garfunkel recently hit headlines for blasting Simon as a "jerk" in a candid interview with Britain's Sunday Telegraph in May (15), and confessed he only befriended the star as a teen because he felt sorry that he was so short, saying, "That compensation gesture has created a monster."

Simon did not respond to the remarks.