Taylor Swift was joined onstage by a host of celebrities including Kendall Jenner at Barclaycard presents British Summertime in Hyde Park on Saturday night (27.06.15). 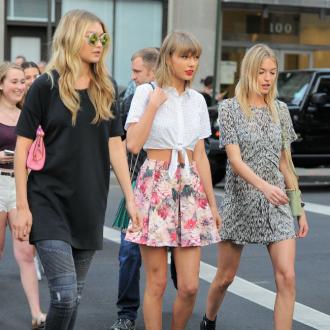 The 25-year-old singer - who was bringing the UK leg of her '1989' tour to a close - couldn't hide her emotions as she gave her famous friends a hug, following the models and tennis champion strutting their stuff on the runway during 'Style', including London model Cara - who Taylor described as ''one of (our) own'' - waving a Union Jack flag.

Opening with 'Welcome To New York', Taylor said she was ''psyched'' to perform to 65,000 people in London.

She said: ''I'm psyched that we have sold out Hyde Park. I just love London in general and I love you.

Taylor wowed her fans with numerous costume changes - including an LED-lit dress - and played all her hits like 'I Knew You Were Trouble' and 'We Are Never Getting Back Together', as well as new songs from her '1989' album. However, she didn't play '22' or 'You Belong With Me'.

The set was interspersed with clips of Taylor's celebrity friends - including Selena Gomez, Haim and Lena Dunham - talking about friendships and romance.

In one clip, Danielle Haim said: ''Who's she gonna date next? What's she gonna do? Let me tell you one thing: Taylor doesn't need to worry about anything.''

Taylor finished the set with 'Shake It Off', and said: ''This has been the best night. It's been unforgettable.''