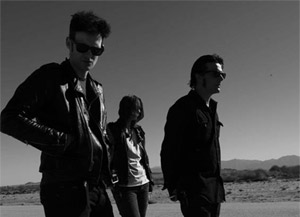 After the success of Nina Nesbitt and Lower Than Atlantis' acoustic performance last month, it's time to crank the amps back up and get loud. Converse invites you to witness indie rock legends Black Rebel Motorcycle Club in all their rock 'n' roll glory play an exclusive show at London's legendary 100 Club.

In 1998 a band called The Elements formed in Los Angeles but on discovering that this name had already been taken, they looked elsewhere for inspiration. Marlon Brando once epitomized the new rebellious cool of '50s America in The Wild One, and it was the name of his gang in that film the band eventually landed upon - Black Rebel Motorcycle Club. Since their humble west coast beginnings, B.R.M.C. have come a long way and grown with an ever progressive style. From hard rock and noise pop to Americana and post punk, one thing that has always remained is B.R.M.C.'s absolute passion for rock 'n' roll. Black Rebel Motorcycle Club at the 100 Club this summer is set to be one of the hottest tickets in town.

With an electric live performance and energy that bounces off the walls, Dexters play with a maturity you wouldn't expect from a band that only formed in 2011. Their roots are firmly placed in London's east end, so they draw on past experiences growing up in a rough side of town and turn it into high octane, loud indie madness. After listening to Dexters it is clear that they draw their inspiration from a very broad spectrum with references to Captain Beefheart, Robert Johnson and The Kinks. Singer Tom Rowlett says, ''the time is right for Dexters, we hear it everywhere we go that people are ready for a band with big tunes and a proper energetic live show. I sincerely believe we are the band that they are waiting for."

IEPI! formed a year ago, borne out of frustration with the formulaic music other bands have been putting out and they used this as a catalyst to create a genre-bending style of their own. The band play fast and hard, and describe it in their own words as 'progressive-organic-instrumental-superlative-superalternative-supermarket-noise.' They call their performance 'a necessary live music experience.' This trio of self-educated Spanish musicians need to be seen to be believed.