Mary J Blige performs in London for her 'biggest fans'

Mary J. Blige performed in London for 500 of her ''biggest fans'' last night (24.06.15) as part of the MasterCard Priceless Surprises campaign. 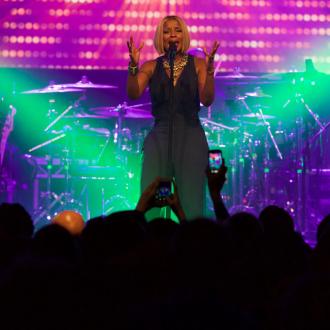 Ahead of her performance at the Glastonbury Festival, the 44-year-old singer wowed the crowd of just 500 people at One Marylebone. Her setlist included her most famous hits 'No More Drama' and 'Family Affair', as well as Disclosure's 'F For You', which she features on.

After the concert, Mary said: ''Performing tonight was an incredible experience - from the intimate crowd to the beautiful venue. I love performing in London, and it was great to be able to do something special for some of my biggest fans, and give them a flavour of the other exciting things to come this summer.''

A host of celebrity fans were in attendance including Leona Lewis and The Wanted's Nathan Sykes.

Mary's performance was part of the MasterCard Priceless Surprises campaign, which saw the 'Be Without You' hitmaker surprise her life-long fan Rana Otemro by flying into London from New York for a personal performance. Other artists in the campaign include Usher, Kaiser Chiefs and Paloma Faith.

Shaun Springer, Head of Brand, Sponsorship and Music, for MasterCard UK & Ireland said: ''Working with Mary J. Blige, a global superstar, has been incredible. Her intimate gig is the second of four in our summer series, and has been a truly Priceless experience for our cardholders.''