Frankie Sandford says depression made her feel ''worthless and ugly'', and her breaking point came when boyfriend Wayne Bridge failed to buy her the correct brand of yoghurts. 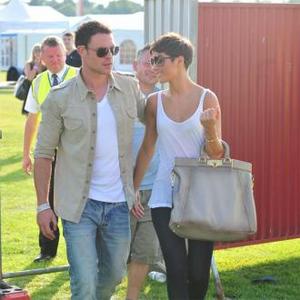 Frankie Sandford says depression made her feel ''worthless and ugly''.

The Saturdays singer - who was admitted to hospital at the end of last year in a bid to beat the mental illness after suffering from panic attacks - admits her breaking point came when her soccer player boyfriend Wayne Bridge didn't buy the right brand of yoghurts she wanted.

The brunette beauty - who has been plagued by the condition since the age of 15 - said: ''Suddenly my illness had control over me.

''I got upset because Wayne hadn't bought the right yogurts; I managed to convince myself he didn't know me at all.

''It set off this spiral of negative thinking - if I disappeared, it wouldn't matter to anyone. In fact, it would make everybody's life easier. I felt that I was worthless, that I was ugly, that I didn't deserve anything. I had some counselling which helped for a while but then I stopped going when I felt better.''

Frankie is now on medication for the condition after attending both one-on-one sessions and Group Therapy, but in her mind she thought she wasn't ''properly sick'' and felt ''selfish, miserable and ungrateful''.

She explained: ''There was a part of me thinking I was putting it on, that I wasn't properly sick, and only sick people should be in hospital.

''I thought that since mine was only a mind thing, I should snap out of it. I got so good at covering it up, I didn't confide in anyone.

''I thought I was selfish, miserable and ungrateful. I'd been given this amazing life, but I wasn't happy.

''I did lose myself, but I feel like me again now. But I try not to put pressure on myself - it's unrealistic, no one is 100 per cent happy all of the time.''

Frankie - who joined pop band S Club Juniors when she was 12 - used to spend hours alone in bed when she was younger, plagued with ''shameful'' thoughts, but the singer didn't feel she could talk to anyone about her condition.

In an interview in Britain's Glamour magazine, she revealed: ''It all started when I was about 15 or 16. I used to stay in bed a lot and had no motivation; I thought I was just being lazy.

''I didn't do anything about it until it got to the stage when I was just coming home and going straight to bed. I wouldn't have any dinner, I couldn't talk to anyone.''