Heavy Rockers Slayer Took Over A Los Angeles Jail Which Once Housed Members Of Serial Killer Charles Manson's 'Family' To Film Their New Video With Machete Star Danny Trejo And A Host Of Horror Film Veterans. 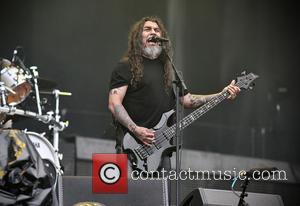 The Repentless promo was shot at the notorious Sybil Brand Institute, which closed in 1997 due to earthquake damage.

As well as Trejo, the video, which chronicles a bloody prison riot, features Friday the 13th star Derek Mears and Tony Moran from the original Halloween movie, while the former child star of 1983 film Sleepaway Camp, Felissa Rose, is the project's producer.

She tells Rolling Stone, "We had the jail cells opened and all the inmates running out and beating the s**t out of each other, slamming each other against the cell. It was terrifying."

Trejo, who is a bona fide ex-convict, agreed to be part of the video because he's a huge Slayer fan.