The 34 year-old beauty believes pregnancy isn't an excuse to start eating an unhealthy diet. "I think that you should be even more conscious of what you're doing," she advised. 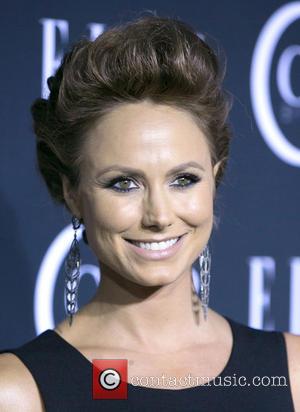 Picture: Stacy Keibler - ELLE's 5th Annual Women in Music concert celebration presented by CUSP by Neiman Marcus in honor of the magazine's May Women in...

Stacy Keibler may only be a matter of months away from giving birth to her first child, but this doesn't mean she will stop maintaining a healthy lifestyle.

The former professional wrestler hasn't suffered from any cravings, exercised regularly and believes carrying a child isn't an "excuse to eat donuts."

Keibler, who married her tech entrepreneur boyfriend Jared Pobre in March, spoke with Us Weekly about her efforts to avoid over-indulge while pregnant.

"I really truly believe that pregnancy is not a time to have an excuse to eat donuts," she told the magazine on Thursday (July 10th). "I haven't had any cravings believe it or not!"

Keibler even claimed that her diet is currently healthier than ever.

"Pregnancy] is a time to be as healthy as you can be and build the foundation for your baby. I think that you should be even more conscious of what you're doing," she said.

The 34 year-old and Pobre, who tied the knot in a beach ceremony in Mexico, are expecting their daughter to arrive in August, but she is ready to be a mother now.

The couple are thoroughly excited about welcoming their child into the world and they have already picked out a name, but are choosing to keep it private for the time being.

"We just talked about one name and that was it - easy peasy," she added. "Everything with us has been easy and effortless, including the name."

Keibler also echoed her comments about being healthy throughout her pregnancy to People, which she puts down to staying "active every single day."

"I'm so grateful and so blessed, but I truly believe that it is a testament to having a healthy lifestyle," she explained. "I'm very mindful of everything that I put into my body and that I put on my skin. I stay active every single day and I've done that since the beginning [so] I just feel like energetically it's been really easy." Keibler is expecting her first child to arrive in August