A League Of Their Own Co-stars Geena Davis And ROSIE O'DONNELL Are Reuniting On The Baseball Field Next Week (07may15) To Celebrate The Launch Of The Thelma & Louise Star's Inaugural Bentonville Film Festival In Arkansas. 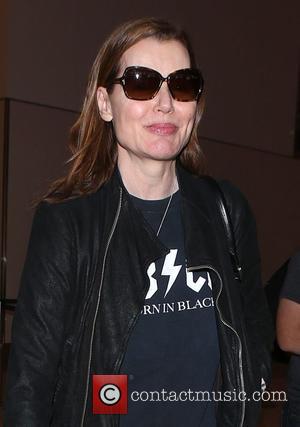 O'Donnell and Davis, who portrayed Doris Murphy and Dottie Hinson in the beloved 1992 sports movie, will hit the diamond with associate members of the All American Girls Professional Baseball League and former professionals Gina Casey and Alice Fracasso at Arvest Park.

Sisters Casey, 85, and Fracasso, 90, were part of the 1940s and 1950s baseball league that inspired A League of Their Own, which also featured Tom Hanks and Madonna.

Davis and O'Donnell will manage two pro-celebrity teams which will play a short game, prior to a special ballpark outdoor screening of their hit film.

Davis says, "The BFF (Bentonville Film Festival) exists to champion women and diversity and what better way to showcase this than to welcome two amazing women who were part of something remarkable that broke barriers and ushered in new opportunities for women in this country.

"Their continued pursuits to keep the stories alive and to keep women playing baseball (and all sports) are an inspiration for me personally, and for the ongoing BFF initiative."

She adds, "Talk about a softball game for the ages! This will be so much fun - and just so everyone knows, there is no way my team is losing to Rosie's team."

Davis has recruited Angela Bassett, Viola Davis, Bruce Dern, Emilio Estevez and Samuel L. Jackson, among others to join the board of her first film festival, and Estevez will be among the judges.