Steven Seagal (born 10.4.1952) Steven Seagal is an American actor and martial artist, best known for his work in films like 'Above the Law' and 'Under Siege'.

Net Worth: In 2013, Steven Seagal was said to have a net worth of 5 million USD by Celebrity Net Worth.

Childhood: Steven Seagal was born to Patricia and Samuel Seagal in Lansing, Michigan. The family moved to California when Steven was five years old. Seagal lied about his age in order to get a job as a dishwasher at a restaurant. While he was there, one of the chefs - a karate expert - noticed how quickly he moved around the kitchen and offered to teach him the basics of karate.

At the age of nineteen, Seagal moved to Japan to study karate and he stayed there until he was twenty one. When he returned to California, Seagal set about opening a teaching at a dojo, before opening a new dojo with the help of a student. Later, Seagal and another student opened a second dojo.

Career: In 1987, Steven Seagal made his debut performance in Above the Law. He had originally performed a karate demonstration for some Warner Brothers executives and been offered several scripts in return. Seagal then wrote the script for what would be Above the Law. Following the success of Above the Law, Seagal made Hard to Kill, Marked for Death and Out of Justice. All three became massive hits and propelled Seagal to Action Hero status. In 1994, Seagal directed his first and only film, On Deadly Ground, which was panned by critics.

In 1997, Seagal starred in his final film in his multi-film contract for Warner Brothers - Fire Down Below. Following this, Seagal only appeared in straight to video releases. In 2010, Seagal made his first film appearance in close to a decade in Machete, in which he also played a villain for the first time in his career.

Personal Life: In 2009, Seagal married his fourth wife. He has seven children. Seagal has a band, Thunderbox, which has released two albums; Songs From the Crystal Cave in 2005, and Mojo Priest in 2006. Seagal is also a Reserve Deputy Chief in Louisiana.

Seagal had appeared on 'Newsnight' to talk about Russia and Vladimir Putin.

Former Hollywood star Steven Seagal walked out of a live BBC ‘Newsnight’ interview after being questioned about the #MeToo movement, and the sexual misconduct allegations previously made against him.

The 66 year old actor appeared on BBC2’s week-night magazine show ‘Newsnight’ on Thursday evening (October 4th), and while being interviewed by presenter Kirsty Wark, was asked about sexual harassment and assault allegations that emerged earlier this year.

“You’ve been very much caught up in all the allegations of sexual harassment, you had a rape allegation against you and I wonder how you deal with all that?” Wark asked Seagal, to which the Under Siege star, without saying a word, removed his earpiece, stood up and walked off the interview.

'Arrested Development' star de Rossi alleges that Seagal behaved inappropriately toward her during an audition for one of his films.

Former ‘Arrested Development’ star Portia De Rossi has accused actor and producer Steven Seagal of sexually harassing her during an audition for one of his movies.

The 44 year old Australian-American actress claimed that the Under Seige star unzipped his trousers in front of her during a private audition, and proceeded to lewdly proposition her.

“My final audition for a Steven Seagal movie took place in his office,” de Rossi wrote on Wednesday evening (November 8th) on Twitter. “He told me how important it was to have chemistry off-screen as he sat me down and unzipped his leather pants.”

Seagal, who has spoken out in favour of Russian foreign policy in Ukraine, has been banned by the Eastern European state.

Ukraine has taken the step of banning Hollywood actor Steven Seagal from the country, deeming him to be a threat to national security, according to several news outlets.

Security services in the eastern European state claim that they have forbidden Seagal from entering the country for a period of five years, in a letter published by news site Apostrophe and later confirmed by the security service’s press secretary to other media publications, including The Guardian. Steven Seagal has been banned from Ukraine

An aging contract killer is about to experience the most dangerous emotion - regret. John Alexander (Steven Seagal) has been killing people in exchange for money for almost as long as he can remember. Finally, with his own age and mortality facing him, John realises that the time has come to do something good with his life, and redeem himself in some small way. Accidentally running into a young woman on the run, John lends a hand to help her escape her pursuers. Little does he know, the woman was a slave to a terrifying mob boss (Vinnie Jones), who is ready to wage an all-out war against John, in order to get the woman back. That, however, is something John will not allow.

Jack is a gambler whose habits have increasingly got more and more out of control. Now finding his way into the criminal underworld of the city, he unwittingly winds up getting into a deadly wager with an unforgiving player, who drags him into the centre of a vicious murder conspiracy. It's all he can do to protect the lives of his wife and child by getting to the bottom of what's really going on, but in doing so he thrusts himself in the centre of the danger, with a vengeful plot now aimed at him. With the odds finally stacked against him, he finds help in the form of Paulie Trunks; a loan shark known for his brutal methods and high debt collection record. He might have the best of the best on his side, but after being jumped in his own apartment by a group of violent thugs and robbed of all the money he has, thinks are not looking in his favour.

Steven Seagal played for pro-Russia separatists over the weekend.

The Hollywood star Steven Seagal played a weekend concert for pro-Russian separatists in the Crimean peninsula over the weekend. Adorned with a flag supporting the seperarists, Segal and his blues band played at a bikers' show held in the city of Sevastopol, home to Putin's Black Sea fleet. The action star had come under in March after supporting Russia's annexation of the peninsula from Ukraine and he was bumped from the line-up of an Estonian blues festival this summer.

By Victoria Pavlova in Lifestyle / Showbiz on 06 January 2014

On-screen action man Steven Seagal might be considering the well-trodden transition from film to political office. Specifically, Seagal might run for the office of Arizona government, according to a recent interview with KNXV-TV. He mentioned the possibility in passing, while discussing his latest reality project, ‘‘Steven Seagal — Lawman: Maricopa County.’’ The series sees Seagal team up with Maricopa County Sheriff Joe Arpaio. It was shot in Arizona and airs on cable TV’s Reelz Channel.

So far Seagal is just considering the possibility.

Apparently Seagal has had discussions with Arpaio about the prospective bid, but he also has other priorities to keep in mind. In a rather conservative leaning comment, Seagal pointed out that in his opinion, the number one problem facing the US at the moment is its open borders. He also came to the defense of Sheriff Arpaio, as well as discussed the prospect of extending amnesty to undocumented immigrants living in the U.S.

Continue reading: From Action Star To Governor - Steven Seagal Might Run For Office Next

He may be 'Above the Law,' but that doesn't mean Steven Seagal isn't considering a career in politics. After admitting that his political ambitions were "kind of a joke" at first, the Under Siege actor has reconsidered his future career and said that he would "remotely consider" running for office in the near-future. Coming to a polling station near you (if you live in Arizona)?

Best known for his on-screen ass whoppings, Seagal has ventured outside of the movies to realise his ambitions in the past, most notably when he became reserve deputy sheriff of Maricopa County. Some of his time working for the law was chronicled in the reality series Steven Seagal: Lawman and it was during the filming of the series that Seagal claims he first began flirting with the idea of moving into politics. Speaking with a local reporter for KNXV-TV, Seagal discussed his recent musings over a potential career shift, admitting that he could very well enter the running to become the next Governor of Arizona.

By Steven Williams in Lifestyle / Showbiz on 26 December 2013

After being arrested near Santa Barbra in November 2013 for drunk driving, Steven Seagal's ex-wife Kelly Lebrock has been charged with a DUI.

After being arrested last year in November, 2013, actress Kelly LeBrock has officially been charged with DUI, or 'Driving Under the Influence'. The actress, known for her appearance in 'Weird Science', is 53-years-old and was taken into custody on 30th November, 2013, by a California Highway Patrol officer after she was seen speeding, swerving, and missing stop signs near Santa Barbara.

Tmz,com stated that Lebrock, the ex-wife of Steven Seagal, was given a breathalyser test and turned up being twice over the legal limit of 0.08. She has now received a DUI charge, as well as the possibility of up to six months in jail and a possible 1,000 USD fine. 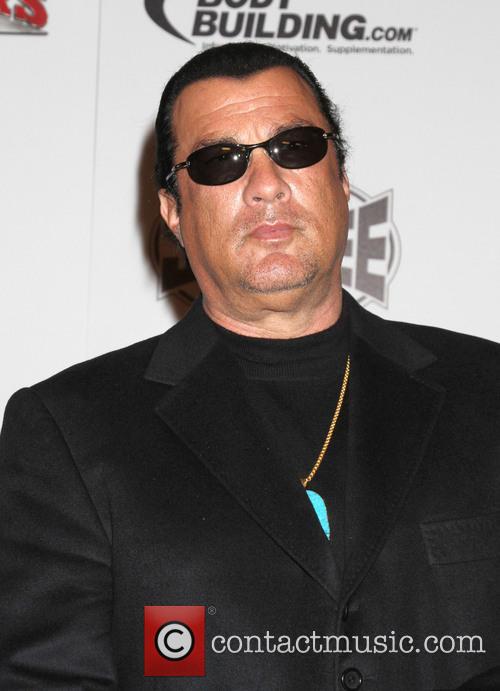 Steven Seagal Saturday 30th April 2011 out and about in Yorkville Toronto, Canada