Album Of The Week: The 25th Anniversary Of Stone Temple Pilots' Purple

It's a day of grunge for us as we recognise the 25th anniversary of San Diego rockers Stone Temple Pilots' second studio album Purple. It was arguably their greatest body of work, certainly their most commercially and critically acclaimed, and indeed remains very much loved to this day. Released on Atlantic Records in 1994, Purple became the band's only album to reach number one in the US where it stayed for three weeks, and went on to sell more than six million copies. By Victoria Pavlova in Music / Festivals on 22 August 2014 Continue reading: You Can Take Scott Weiland Out Of Stone Temple Pilots, But You Can't Take The Pilot Out Of Weiland

It finally looks like the end for their old singer, and in with a (not much) younger one.

Scott Weiland’s been denying for ages, but there couldn’t have been much more proof that he is back out of the Stone Temple Pilots, after the group made an appearance at a live show with their new singer. It wasn’t just any new singer either, it was one of the biggest rock singers of the past 15 years, in Linkin Park’s Chester Bennington.

"Chester has a one-of-a-kind voice that we've admired for a long time," said Pilots guitarist Dean DeLeo to MTV, after the group played a surprise set at KROQ's Weenie Roast over the weekend. "We know Linkin Park will always be his priority, but we thought it would be cool to try something together. We managed to find the time to record a song and we're all really happy with the result."

Bennington is moving quickly with the band too; the group already had a new track on the go with him, the Led Zeppelin-esque stomp of ‘Out Of Time’.

Continue reading: Chester Bennington In And Scott Weiland Out For Stone Temple Pilots

When Stone Temple Pilots issued a statement to say that they have “terminated” their erstwhile singer Scott Weiland, we feared the worst. Clearly, we have been watching too many action movies. They may have killed his dreams but Weiland, it appears, is alive and well, though his band no longer want him around, it seems. Their PR sent a brief email, received by MTV News, which read “Stone Temple Pilots have announced they have officially terminated Scott Weiland.” That was the entirety of the email, though their PR rep promised that further details will come soon, regarding the split.

This isn’t the first that we’ve heard of internal fractions within Stone Temple pilots though. Last year, Slash let slip that Scott had been fired by the band, after playing with him in Velvet Revolver. There had been no word from either Weiland or the remaining members of STP. Things have never been plain sailing for the alt-rockers, though. After their swift rise to fame in the 1990s with hits such as ‘Interstate Love Song’ and ‘Plush,’ they became one of the most influential bands associated with the grunge scene. In 2008, they put an end to a five year break, after they imploded amongst news of Weiland fighting wth the DeLeo brothers.

2010 saw the band release their first album in nine years but since then, the band have gone quiet, with Weiland announcing a new solo tour. Today’s news pretty much puts the kibosh on any thoughts of them getting back together. Watch this space for that ‘further news’ their rep has promised. 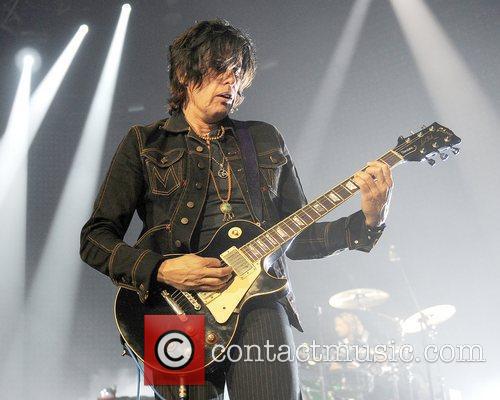 Comeback albums by their very nature can be extremely rocky territory for bands. At best they can re-energise and bring back to life a once great band, elevating them back to their former creative peak if not commercial status (See Alice in Chains' Black Gives Way to Blue album). At worst they can be a second rate rehash of former glories, leaving a sour taste and offering only a reminder of why their older material was so good: for example Hole's Nobody's Daughter album and Strays by Jane's Addiction. Thankfully, Stone Temple Pilots' self-titled new album, their first in nine years, falls into the former category. Put simply, these guys are back, and it rocks.

The album opens with recent single Between the Lines, which is a sub-three minute rock monster. With no fanfare or unnecessary build up, you're instantly hit with layers of guitars. It sounds like classic STP, but faster, more to the point, a band hungry for their place at the top of the pile. This is a theme throughout the album: there are only two songs which pass the four minute mark. This doesn't count against the album though - the songs say everything they need to. Tracks like Fast As I Can, Take a Load Off and Hazy Days all pack as much of a punch as the most hard hitting songs from the STP back catalogue such as Down and even Sex Type Thing.

One thing that really hits you about this album is the quality of the guitar work. There are some brilliant hard rock riffs, for example Hazy Days, which will lodge itself in your head for days on end. As well as the riffs, there are some truly breathtaking guitar solos. Huckleberry Crumble and Hickory Dichotomy for example feature some jaw dropping technical skill. Sometimes the guitars lend an almost 70s throwback tone to the songs, which is no bad thing. As these guys have grown older, clearly their ability has not faded at all.

Of course, it's not all about rocking this go-round with STP. One of their strengths in the past has been their more textured, slower songs, like fan-favourite Adhesive and Sour Girl. This album caters for them too, with the anthemic Dare If You Dare and the album's epic closer Maver, which ends with some beautiful interplay between the guitar and a piano. Make no mistake, this is the most upbeat and positive Stone Temple Pilots have ever sounded. Cinnamon and Bagman are poppy tracks, filled with great hooks.

To sum up, Stone Temple Pilots have come back fighting, seemingly leaving all their past baggage at the door. This is a solid album - it offers something different to the previous five albums, while still sounding like Stone Temple Pilots. With time, this could even stand up next to those albums. If you were in a band in the 90s and you're thinking of making a comeback, take note: this is how it's done.

At the moment, we seem to be in the grips of some kind of 1990s renaissance, with Alice in Chains, Pearl Jam and The Smashing Pumpkins all releasing new and impressive material in the last 12 months, the imminent release of the new Hole album and the Soundgarden reunion promised not too far off in the future. Following the messy demise of Velvet Revolver, it was almost a given that Stone Temple Pilots would be next on the list to reform, and in 2008 they did, with a lengthy tour of the USA.