The Strokes singer Julian Casablancas' band The Voidz has confirmed the track listing and title for their upcoming second album.

Julian Casablancas' band The Voidz have confirmed the track listing and name for their upcoming new album.

The Strokes front man formed the group - previously known as Julian Casablancas+The Voidz - in 2013, and in March they will release the highly anticipated follow up to their debut LP 'Tyranny'.

The Strokes Shoot Down Album Rumours

The Strokes have confirmed they are recording a new album but have said a new LP is ''years away'' - if at all.

The Strokes have shut down rumours they've been working on new material.

The 'You Only Live Once' hitmakers' fans couldn't contain their excitement when band member Albert Hammond Jr.'s father revealed recently that the group have been back in the studio recording their sixth studio album with producer Rick Rubin.

But they've been forced to take to Twitter to squash the buzz as they haven't been working on any new content and have confirmed a new LP is ''years away, if at all''.

After a three year absence, indie icons The Strokes have announced the release of new material, debuting a new single ‘OBLIVIUS’ earlier today while unveiling a new four-track EP due to come out next month.

The track received its first play on Thursday morning (May 26th) on lead singer Julian Casablancas’ new radio show Culture Void, which airs on American radio station Sirius XMU once a month. Hours before it dropped, the singer had mentioned on social media that new material would be being played. Julian Casablancas performing with The Strokes in 2015 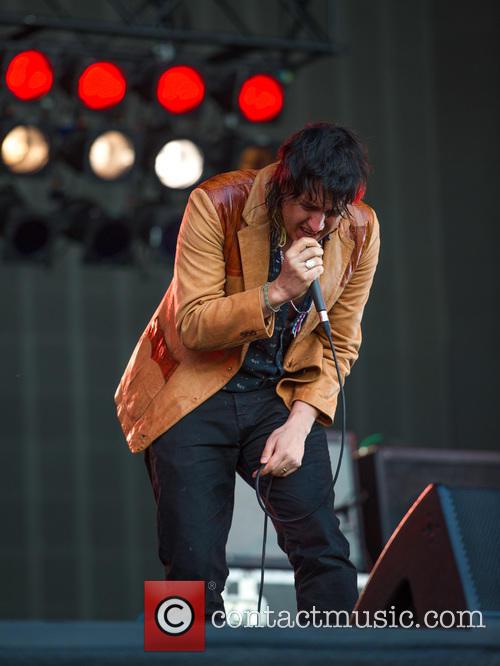 By Jim Pusey in Music Reviews on 25 September 2014

Julian Casablancas is an angry man, or so it would appear, thanks to his latest project away from The Strokes. His second solo outing, and his first with newly formed band The Voidz, is an odd and challenging record. That's not to say that 'Tyranny' is bad, rather a drastic departure from Casablancas' usual sound. Look at it this way; if 2009's 'Phrazes For The Young' was Casablancas dipping his toe into a different body of work, here he's jumped in with both feet. It's that conviction that makes 'Tyranny' somehow more interesting than this noisy grab bag of rough ideas could have otherwise been.

If Casablancas' work with the Strokes pays homage to 70s New York punk, then his work with the Voidz is a clear progression to post-punk, hardcore and even industrial influences from the following decade. A good example is 'Tyranny''s opening track 'Take Me In Your Army'. There are shades of Nine Inch Nails in the metallic and regimented drum beat, Joy Division in the synths and guitars and, most bizarrely, Prince in the falsetto delivery of the chorus. It's a strange concoction, but it effectively sets the scene for what's to come. There's a dark and brooding mood on display throughout 'Tyranny', one that won't endear it to some listeners, however it quickly becomes clear that really isn't the point. Casablancas describes his upcoming North American tour as an opportunity to "melt people's faces off", he's obviously in a confrontational mood and it shows here.

There's a loose narrative theme throughout 'Tyranny' as Casablancas rails against capitalism and the injustices he tries to pinpoint in corporate America. But really the social commentary of tracks like 'M.utually A.ssured D.estruction' or 'Business Dog' takes a backseat to the sonic experimentation going on. The former sounds like speed metal marginally slowed down and played through a boombox tapedeck. Elsewhere, vocals are severely distorted or processed to suit the mood, even the closest thing to The Strokes here ('Nintendo Blood') sounds far more unhinged than Casablancas has in the past. While it takes some getting used to, the rough edges and unpolished approach is a welcome move throughout 'Tyranny'.

By Holly Williams in Music / Festivals on 10 September 2014 Daft Punk have released the video for their track 'Instant Crush,' featuring The Strokes singer Julian Calablancas in mannequin form. The video for the latest single to be taken from Random Access Memories features the New Yorker dressed in his recognizable black leather jacket, singing alongside a mannequin version of himself, dressed in Napoleonic clothing. He is singing to a female mannequin. Oh and Daft Punk's famous helmets make an appearance. Daft Punk first met with Casablancas whilst working on the Tron: Legacy soundtrack in 2010, presenting the Strokes man with an instrumental demo track intended for use on a new album. The frontman responded favorably to the demo and provided the accompanying vocals - which would later become Instant Crush.

Not only did Daft Punk rock Coachella, apparently they rocked Spotify too.

The French electronic duo Daft Punk set a record this week with their newest single “Get Lucky”.

The track, which was released as a teaser of the band’s upcoming album, Random Access Memories, due to be released on May 21st, had the biggest streaming day on music service Spotify last Friday, the company reports, although it wouldn’t give the exact number of streams. The previous holder of the record was Thrift Shop by Macklemore and Ryan Lewis, which became an internet sensation earlier this year.

Daft Punk’s Get Lucky features rapper/producer Pharrell Williams and the album “Random Access Memories” will reportedly yield some additional exciting collaborations, including ones with including Strokes lead singer Julian Casablancas, Animal Collective’s Noah Lennox, Giorgio Moroder, Todd Edwards, DJ Falcon, Academy Award-winning musician Paul Williams and Chilly Gonzales. Daft Punk’s Guy-Manuel de Homem-Christo and Thomas Bangalter have been busy performing and promoting the album ahead of its release, most recently playing a set at the infamous Coachella Music Festival. The official album release party is going to be held in a somewhat odd location though – an agricultural show in Wee Waa, Australia. Hey, we’re not questioning their methods, whatever they’re doing seems to be working out pretty well.

Julian Casablancas, I Wish It Was Christmas Today Single Review

By Andrew Lockwood in Music Reviews on 17 December 2009

Review of Julian Casablancas single I Wish It Was Christmas Today