A Court Hearing Over The Late B.B. King's Estate Has Been Delayed By Almost Two Weeks. 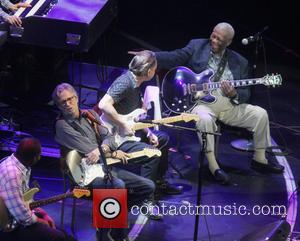 Following the blues icon's death in May (15), his longtime business manager LaVerne Toney and four of his adult daughters, Patty King, Karen Williams, Rita Washington and Barbara Winfree, have been at odds.

Toney had been named his executor, but the King siblings have challenged the appointment, alleging she misappropriated funds and mistreated him prior to his death.

They also claimed King had been poisoned, prompting a probe by a coroner.

Toney's legal team filed documents with a court in Nevada asking a judge to confirm her as executor, and included testimonials from three doctors swearing King was properly cared for before he died, as well as an affidavit from one of the star's granddaughters who visited the guitarist shortly before he passed away.

They were slated to appear in a Clark County District Court on Friday (12Jun15), but on Thursday (11Jun15), a spokeswoman for the court announced officials are pushing the hearing back to 22 June (15), which will put the case before the judge who heads probate courts in Las Vegas.

The news comes a day after King's daughters filed new legal documents which raise the possibility that their famous father filed a second "missing" will.